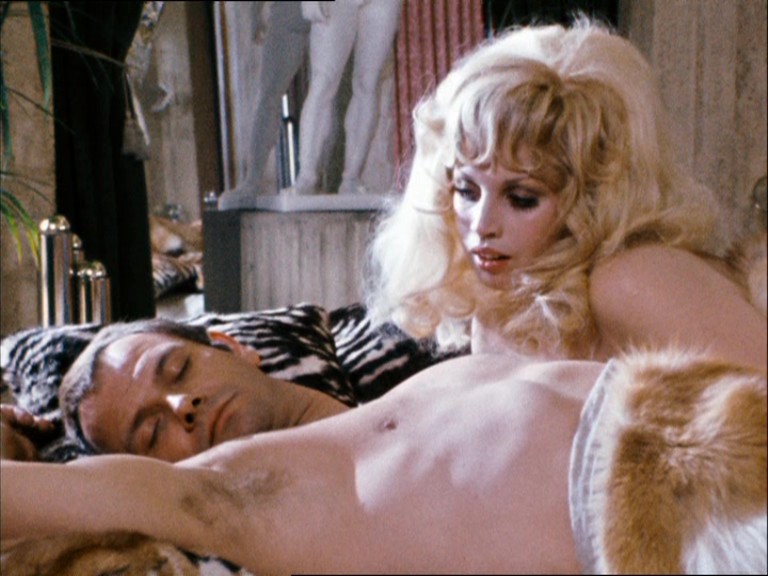 World On A Wire, a two-part television spectacle by renowned German director Rainer Werner Fassbinder, broaches the same issue nearly three decades earlier than Hollywood’s high-tech, turn-of-the-millennium surprise hit. The first of two adaptations of Daniel F. Galouye’s science-fiction novel Simulacron-3 (the other one being Josef Rusnak’s 1999 movie The Thirteenth Floor), World On A Wire depicts a future in which a computer project called Simulacron is able to create a lifelike virtual reality.

In this universe, Henry Vollmer (Adrian Hoven), the leader of the Simulacron project, suddenly dies after trying to reveal an astounding discovery. His friend Dr. Fred Stiller (Klaus Löwitsch) succeeds him, but experiences odd phenomena. The head of security responsible for the project, Günther Lause (Ivan Desny), disappears in the middle of a conversation, never to be seen again. Following the incident, he seems to have never existed. Then Stiller begins to suffer from fits of dizziness, just like Vollmer did before his death.

After some time, he starts to wonder if he himself isn’t merely a part of a virtual reality similar to the one he controls and about the people around him. Whom can he trust – Vollmer’s daughter Eva (Mascha Rabben), his apparently loyal colleague Fritz Walfang (Günter Lamprecht), or his new secretary Gloria Fromm (Barbara Valentin)? And what’s he supposed to do about Herbert Siskins (Karl-Heinz Vosgerau), the corrupt megalomaniacal head of the institute responsible for Simulacron? Stiller tries to investigate if the computer has any influence on these events and falls into what others perceive as a state of madness.

To contemporary viewers who are only familiar with modern blockbusters, World On A Wire will probably look a little weird. Unlike in more recent science-fiction films – The Matrix comes to mind again – there are no flashy special effects to speak of. Fassbinder shot the project in 16mm at a modest budget of slightly less than a million Deutschmarks on real streets, in a real environment, rather than by means of CGI and blue-screen backdrops.

World On A Wire was filmed in Paris, Munich, and Cologne. The sets show the lifestyle of people in West Germany in the early 1970s – furniture, interior design, even the phone booths that Germans who grew up before Reunification will undoubtedly still be familiar with. Phones are incidentally another parallel to The Matrix; they are used to transport people into and out of cyberspace.

Although a low-budget project designed for television, Fassbinder’s film also offers visual similarities to such works as Stanley Kubrick’s 2001: A Space Odyssey and A Clockwork Orange, especially in the first of the two parts. During the second half, when Stiller emerges on the search for the truth, World On A Wire then evolves into a sort of conspiracy thriller not unlike Alan J. Pakula’s The Parallax View and Richard Fleischer’s Soylent Green. Alfred Hitchcock would be proud of Fassbinder’s work in that part. Like Vollmer before him, Stiller becomes The Man Who Knew Too Much – and the German equivalent to Jean-Luc Godard’s detective Lemmy Caution from Alphaville who must find a missing man in a future universe.

At a running time of 213 minutes, World On A Wire takes its time to introduce the viewers to its plot, characters, and settings. Compared to modern movies, it moves slowly. Fassbinder and cinematographers Michael Ballhaus (a Martin Scorsese regular) and Ulrich Prinz employ pans, swishes, zooms, and track shots rather than the rapid editing we’ve become so used to in recent years. Their camerawork is outstanding. The frequent shots of looking glasses evoke an atmosphere of paranoia.

By means of visual language, World On A Wire challenges whether one’s identity is real and what the nature of reality is. This is especially true in the room that houses Simulacron, the enormous supercomputer that – in true 1970s fashion – must be reconfigured by using punch cards. Not only do the mirrors in that room provide a sleek a futuristic look, but they put the film’s two parallel universes, the real world and cyberspace, into a direct opposition. After all, it’s in this very room where the line between the two realms begins to blur.

In general, World On A Wire must be regarded as a sort of proto-Matrix. But if you thought the Wachowkis’ trilogy was philosophical, think again. Fassbinder’s is a lot more intellectual in his approach. His reflections go far beyond what their more recent, action-laden films or other similar Hollywood movies from the same era, such as David Cronenberg’s eXistenZ or Alex Proyas’s Dark City have to offer.

World On A Wire is different, to a certain degree owed to Fassbinder having been different from most directors. The man was an idiosyncratic prodigy about whom people tended to quip that he shot his movies faster than their running time. He worked fast, and he lived a life in the fast lane as well. At the time World On A Wire was first broadcasted, the enfant terrible of the New German Cinema was only 28 and already an established filmmaker, and he died of a cocaine overdose and sleeping pills after having been part of a total of 44 projects a mere seven years later.

If you make the effort to engage with World On A Wire and its somewhat peculiar style of telling its story – at least from a modern mainstream point of view – the television mini-series rewards you in its own quirky way. With World On A Wire, Fassbinder has created a science-fiction masterpiece that is probably the best German exploration of the genre ever and should be placed in the pantheon of dystopian fantasies.

Fans of the director will notice that the lengthy film uses an armada of his regulars and some of the most prominent contributors to the New German cinema. Ballhaus has already been mentioned. Other than Löwitsch, Lamprecht, Valentin, and Hoven, actors such as Ulli Lommel, Wolfgang Schenck, Ingrid Caven, Kurt Raab, Ivan Desny, Margit Carstensen, El Hedi ben Salem, and former Bond villain Gottfried John (from GoldenEye) also appear in the two-part spectacle.

For years, World On A Wire had been largely unavailable to the public for reasons only known to the German state-owned television station that financed the project. The film has finally received a grand-scale domestic release over the last two years, and the new high-def restoration by the prestigious Criterion Collection label looks nothing but gorgeous. World On A Wire is more than deserving of great home video versions – and to be watched.