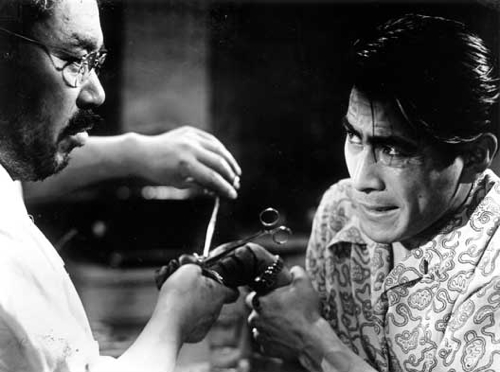 Japanese master Akira Kurosawa is arguably one of the greatest filmmakers of all time. Yet he seems to have been largely forgotten by modern cinemagoers – despite the fact that he produced a string of great movies that have influenced so many Hollywood and foreign classics. We’ve all heard of John Sturges’s The Magnificent Seven, Sergio Leone’s A Fistful Of Dollars, and, of course, George Lucas’s epic Star Wars, right? Not many people know that none of them would have been possible without Kurosawa.

A trained painter, Akira started his directorial career shortly after the end of the Second World War in a Japan that was lying in shambles after its loss and the bombings of Hiroshima and Nagasaki. His early works reflect the country’s condition at the time. Drunken Angel, in particular, can be read as a metaphor for what postwar Japan was going through. But the movie is also noteworthy for something else, the beginning of one of the most brilliant actor/director relationships in the history of cinema. Think of a Japanese version of Robert De Niro and Martin Scorsese.

Drunken Angelmarks the first time that we see Toshirô Mifune in a Kurosawa feature. After his debut, he became the filmmaker’s favorite leading man for the better part of two decades. Mifune appeared in virtually all of the director’s movies until 1965’s Red Beard. Likewise, Drunken Angel introduces us to Takashi Shimura, an excellent character actor who starred in several of Kurosawa’s best works – Rashômon, Ikiru, and, probably the most famous of his movies, Seven Samurai.

In Drunken Angel, Matsunaga (Mifune), a hoodlum, is treated by Sanada (Shimura), an alcoholic physician, after a battle with rival criminals. The gangster suffers from tuberculosis, and the doctor convinces him to begin treatment for his illness. In the course of time, the two develop an uneasy bond until Matsanuga’s former boss Okada (Reisaburô Yamamoto) gets out of jail and plans to take back what he claims is his – the gang. Having been banned and lost his status as the leader of the pack, Matsunaga faces Okada in a battle to the death.

When comparing Drunken Angel to other Kurasawa movies, it’s fairly obvious that he was still searching for his distinctive signature at the time. As usual in his films, the plot unfolds slowly, but the pacing is still a little off. Additionally, the director attempts to cram a ton of different ideas into the feature’s 98-minute running time. He would find his singular handwriting with Rashômon two years later, beginning a string of masterpieces that would net him an Oscar for the Soviet production Dersu Uzala as Best Foreign Language Film in 1976 and would only end when Kurosawa quit working at the age of 83.

Drunken Angel, however, is remarkable because it’s not a typical Kurosawa movie. It’s neither set in medieval Japan, nor are there any samurais. Rather, it’s an Eastern version of a gangster picture or a film noir – two genres that were very popular at the time. The Yakuza angle gives proof to that. The director, however, combines it with filthy surroundings and an atmosphere reminiscent of neorealism. The settings of Drunken Angel look almost like the bleak postwar Italy of Roberto Rossellini’s Rome, Open City or Vittorio De Sica’s Bicycle Thieves.

The parallel makes sense, in a way. Both countries were on the losing end of the Second World War and suffering from poverty, destruction, and a demoralized population. Chaos rules the world that the characters of Drunken Angel inhabit, similar to the Vienna from Carol Reed’s noir masterpiece The Third Man or the ruined former Third Reich from Rossellini’s Germany Year Zero. You have to applaud Kurosawa for providing some humanity in an otherwise anarchic environment. While Drunken Angel is certainly flawed, it already hints at the great things to come from the man who was arguably Japan’s best director ever.