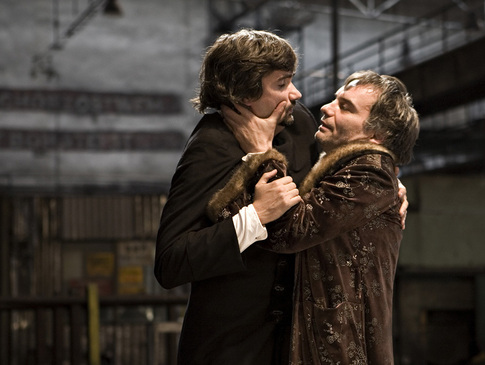 Dostoevsky’s latter-day opus about the siblings and their father is among the masterpieces of world literature. It asks profound questions about ethics and religion. Is there a God? Does the devil exist? Is everything allowed because we live in a world without morality? And if so, does patricide even constitute a crime?

One of the most interesting adaptations of the material is The Karamazovs by Czech director Petr Zelenka. We witness a group of thesps from Prague on a trip to Krakow in Poland to stage the novel as a play in a derelict steelworks as part of the Closer to Life Festival. The project, however, is born under the bad sign, apparently doomed from the start. When they arrive, the roof is about to cave in, so that the actors are told to wear safety helmets. Their sole consistent audience is a laborer (Andrzej Mastalerz) who rather follows each dress rehearsal than watching over his seven-year-old son who has suffered a tragic accident in the factory.

Soon it also becomes obvious that the actors from the troupe do not get along all too well with each other either. Conflict always lurks beneath the surface. A prime example is David Novotný, who plays the part of Dmitry Karamazov in the film, trying to vamoose in order to be able to attend a night shoot in Prague he has completely forgotten about. The director (Roman Luknár), however, undoes his every attempt.

What Zelenka puts on the screen is an intriguing mixture of art and life. He combines two stories, making the movie an almost metafictional experience. We are constantly reminded that we are watching a play in a film, when the performers rehearse several scenes from The Brothers Karamazov. Yet the two plots do not only alternate here, as is the case in many other films – they blend perfectly. Surprise is an important element in this regard. On several occasions, the audience cannot be sure whether they see the actors in their parts from Dostoevsky’s novel or playing themselves. Their roles can change within the blink of an eye, leaving the viewers dumbfounded.

Zelenka’s The Karamazovs is an overlooked gem. The ramshackle factory works particularly well as the film’s setting, because the place in itself creates an atmosphere eerily similar to the chaos in the book. It also consists of wide open spaces, thus enhancing the experience of a drama unfolding in front of one’s eyes. The personal animosities between the actors mirror those from the novel. Novotný, for instance, does not only quarrel with the director but also with Martin Mysicka, who plays Alyosha in the film. Life therefore imitates art in Zelenka’s movie and eventually, as in The Brothers Karamazov, imitates death.

The fine cinematography by Alexander Surkala and the composed score by Jan A.P. Kaczmarek add to the film’s excellence, as do the commendable performances. They may be theatrical, decidedly over-the-top, and even comic at times, especially those by Radek Holub as Smerdyakov and Ivan Trojan as old Fyodor Karamazov. Then again, this is probably exactly how Dostoevsky’s novel envisioned them.